When I booked a reading into Bluestockings Bookstore Café and Activist Center back in September, I thought it would be great to be in New York City during and immediately after the 2016 presidential election.

I was right, but not in the way I expected to be.

Like many in the LGBT community, I expected the United States to continue moving forward from its first black president to its first woman president. I believed we would have something to celebrate, and the combination of serious introspection and saucy playfulness of Not Just Another Pretty Face would fit the mood perfectly. After all, the underlying question the anthology explores is, “Suppose the outcome you most desire comes true. What then?”

Nobody I know (save one in-law) wished for the outcome we got in that election.

But the question is still the same: Suppose the outcome you got is the one you wanted least. What then?

Throughout the process of assembling and then presenting Not Just Another Pretty Face, I was amazed by the diversity, inventiveness, and insightfulness of everyone involved: the models; Dot, the photographer; the authors.  And that continued to our last reading of 2016 at Bluestockings in New York City, three days after the shock of the election. The reaction of one of the models whose photo appears in the book is an example.

Dot’s photos of Ali Mushtaq inspired two of the stories in NJAPF.  Earlier this summer, Ali had been elected Mr. Long Beach Leather. He wrote then, “Here I am, the son of Pakistani immigrants, elected the first Muslim-American leather title-holder. It is the American Dream come true!” 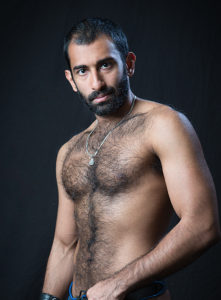 You might also say Ali represents many of the people the Trump campaign demonized: gay, non-Christian, people of color. That campaign did its best to make its supporters feel that such people were taking greatness away from their lives, their families, their America.

Instead, Ali demonstrated that he understood something about our people – all our people.  He wrote,

It’s really hard finding the words to speak. But I have to say something to my community, to my country.

I know for a lot of us, we feel a tremendous loss. It was a loss because we know that our future as Americans is now put on less than solid ground. Our future as equals with one another at home and as equals in our international community are now in jeopardy.

But now is the time to stand together. To stand in solidarity against fascism, against bigotry, and against inequality. For democracy. To remember the bonds we’ve built and the community we have to build.

As a gay Pakistani leatherman native to America, I stand with you because you’ve stood with me.

The night after the reading at Bluestockings, my last night in New York, I rode the subway to Times Square. Coming up the stairs I was dazzled by the distracting lights. Look here! they called. The great show goes on! My eyes were drawn up and my jaw dropped open. 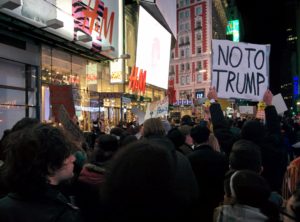 The great fight goes on.